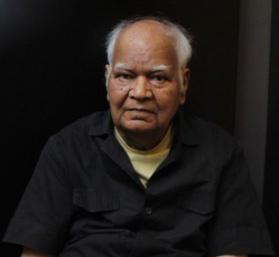 Prof. Om Prakash Sharma
Prof Om Prakash Sharma was an institution by himself. Like a lion on the prowl he strode the first floor, sharp eyes missing nothing, as he gently oversaw the gradual but irreversible transformation of rough-cut rocks of the first year class into polished sparklers who produced “Art Thesis” masterpieces that endure till today, dotting our campuses and imbuing them with life.

For so many of us who had never attended a concert or visited an art gallery or had even remotest touch of art he inspired hope of finding the magical ability to do things beautifully. He opened the door and gently eased us into the world of aesthetics and refinement we never knew existed. He ensured that our immersion was complete with a generous helping of slides and films, art books in the library, sketching excursions and special interactions with his eminent artist friends. At the same time, he used the nude drawing class to explain structural concepts though the deformation in musculature and posture. Such was his wizardry.

He came across as a very simple person. Outwardly he bore no signs of the typical Bohemian artist of that time. In spotless white safari, with razor sharp creases, clean-shaven, of stern visage and ramrod straight he was so much like my bau-ji (grandfather) back home. It was only when the thick silence was broken by a soft, extended “K-e-w-a-l-!” with the slightest hint of melody that one glimpsed what lay inside this multi-faceted persona. In there was a painter, a musician, an educator, an organiser, an administrator, a confirmed romantic and a few other roles in between all rolled into one.

He could be a maverick and a conformist, hard-nosed and soft-hearted, with an impish twinkle in the eye and sage words on the lips as was suited to drive the point home. In Architecture School it made all the difference between the let-it-all-hang-out insouciance of self-indulgent art and the responsible creativity of a service providing professional. We realised that to express with panache one did not have to be born with wings. Or horns, though we usually depicted him so in caricatures. If he, with his default ordinariness could get there, we had a chance too.

Unpredictable as can be,  he was unforgiving in trashing shoddy stuff. There was no uncertainty when you did not get it right, but in the very next class he would surprise you by picking up your handiwork and praising it to high heavens. The upshot was that when you got back your piece, you were forced to reflect on what was so outstanding about what you had done and commit that to your memory.

As artist-in-residence, he constantly stoked our curiosity to speculate as to when and how a painting would be finished, or indeed if it was finished already. His perfectionism was a labour of love. Often on a fine morning a work nearly finished would be primer-ed  over and begun again, much to our consternation. As a result we never got squeamish about our own “re-does”.

There is so much in me that seems like it was patted down to shape by him. The traditions that he set up at SPA mark out this school as unique in the way we inculcate delight in the ideation of architecture. Those of us fortunate to have grown in his shadow will carry his imprint always and strive to give as good as we got. At every corner in our SPA buildings little nuggets of work that he inspired will forever have the power to make us pause and wonder, Art Studio will always remain hallowed ground and OP will never pass away.